Season 51 has kicked off and it’s nice to see matches already being scheduled and played. Heading into the season, we bid farewell to one of our mods, sweetjohn33, who is stepping away after eight seasons. We would like to thank him for all of his hard work and dedication over the past year+. Later this season, we will be putting out a call for those interested in joining the moderator team. We do this at least once every three seasons.

I would also like to call attention to the Season 51 Feedback Report that summarizes the results of our Town Hall on the league calendar and other questions we solicited feedback on in the returning form. One change I would like to call attention to is the change in the league calendar. We will be taking a shorter break for the Dominion Online Championships, 4 weeks instead of 6, and spreading out the extra two weeks by taking two 3 week breaks between seasons throughout the calendar year. To begin aligning the calendars, we will be taking a three week break after this season rather than the usual two.

Also recently announced in the Dominion Discord in our announcements channel was a summary of rules changes heading into this season. These revolve around changes to table settings in response to the recent Shuffle iT client update, rules to cover the release of new cards outside of full expansions, and a focus on in-season deadlines (more to come later). You can find the full change log here.

And now, for some additional changes and updates.

As some of you have already noticed, especially in tiers F and below, the promotion scheme looks a little different than you’ve become accustomed to. The reason for this is that unless we see a surge in new signups for next season, we will be contracting down to 9 tiers, leaving only A-I in Season 52. Technically, this should have happened this season, but we were very close to the number of players needed (589) to maintain 10 tiers and didn’t know until too late that we wouldn’t reach that number. We began this season with 582 players and have a few more now on the waiting list. Rather than hurriedly and surprisingly springing the 9 tier system on everybody, we will instead make the switch following this season. Once we contract down to 9 tiers, we won’t expand back to 10 until we have 690 or more players to start a season. 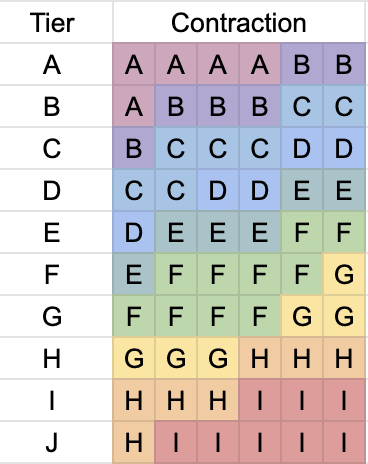 We have written this into this season’s infrastructure and standings at the end will reflect where everybody will be placed next season. There will need to be some additional player movement prior to next season, but if participation rates stay consistent, we will be looking at additional free promotions and play-in matches similar to what we saw this season.

However, there is one possible exception to the above. If we reach 624 or more players for Season 52, we will maintain our 10 tiered structure. In that scenario, we’ll have the following promotion/demotion scheme, which should look very familiar to everybody: 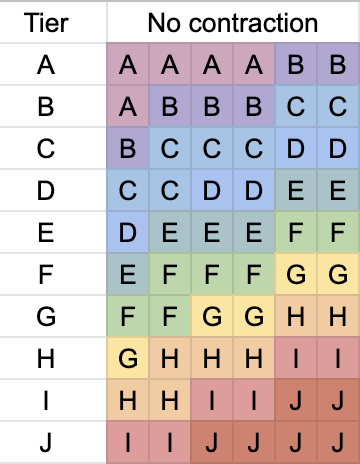 We will do our best to communicate how we stand numbers wise towards the end of the season, but regardless of where you finish, you can find your two possible Season 52 placements above. If you have any questions or would like a more in depth explanation, feel free to reach out and the finer details and numbers can be presented.

In Season 50, we adopted formal progress benchmarks for completing and scheduling matches throughout the season. However, we overlooked updating the automated messages we send out, which led to some confusion and inconsistencies between what was stated and what we envisioned implementing. For that reason, we were lenient with these benchmarks when it came to removing players. In this and future seasons, we have updated our messaging to be in line with the rules and will be looking for players to meet the following:

To further highlight these benchmarks, we have included them in the opening messages in your division channel on Discord for easy reference. The default will be to remove players who fail to meet the above pacing, but we understand that there may be extenuating circumstances that cause progress to be delayed. If you find yourself in one of these situations, please reach out to your moderator sooner rather than later so that we are aware of any potential issues. While we hope that these will not come into play, ensuring that matches are being at least scheduled throughout the season will help limit the angst and discomfort that come from players who wait until the last minute to plan their season, putting pressure on the rest of their division to accommodate them.