As we sit a week into Season 49, I wanted to pick up on something I’ve been slacking on the past few seasons: posting an update newsletter. This season, we welcomed three new Moderators to our team: AJL828, Naesala, and snowbz. All three have hit the ground running and gotten up to speed quite quickly. There has also been a pair of announcements posted outside of this newsletter that I would like to call attention to. First, there has been a major overhaul of the structure of the League Rules document. While none of the rules have changed, the rules now use a completely different layout and there have been wording changes aimed at increasing clarity. Second, a summary of the Season 48 Town Hall and Season 48 Feedback we received has been posted. The feedback we received helped guide some of the decisions that will be covered later in this update and continue to assist us in making sure we keep League fun, exciting, and competitive for all.

I would now like to turn towards the future. While there have been only minor changes the past few seasons, as we look forward to the Golden Anniversary of League (Season 50), there are some changes on the horizon.

While we continue to see high returning rates amongst league players, we’ve seen a decline in the number of new signups over the past few seasons. While there are certainly other factors, we’ve seen League participation drop from 838 players at the start of Season 44 down to 592 at the start of Season 49. If this trend continues, we’ll be under 588 players for Season 50, which is the threshold for contraction from 10 tiers down to 9. Should we reach this point, J tier will be removed and not added back until we expand beyond 690 players. If we are to contract after this season, we will need a one-time transition scheme to place players from Season 49 into their new tier for Season 50. That transition can be found below and is compared to Season 49: 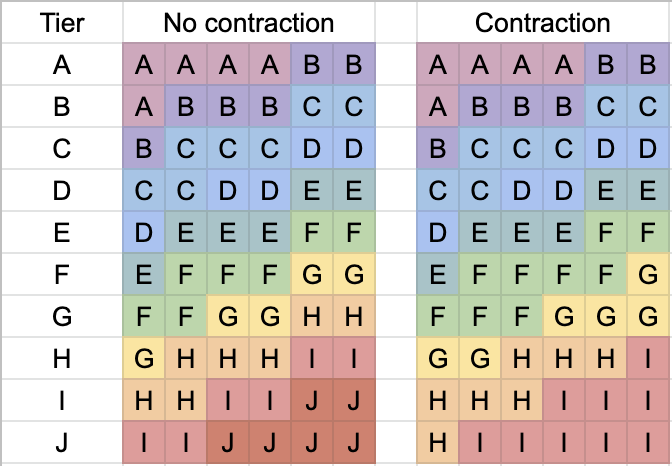 And a visual representation of where players will move under the contraction scheme: 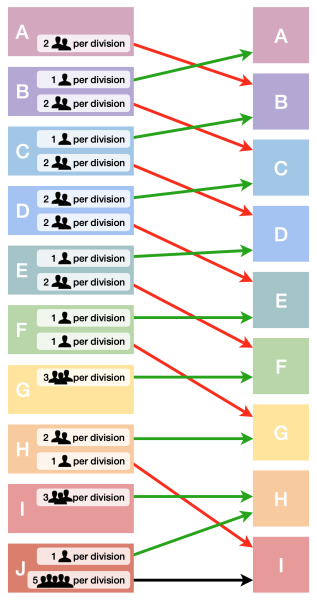 Tiers A-E are unaffected by the change and there are slight modifications in F and below to:

While we won’t know the player counts for Season 50 until after sign-ups close, we wanted everybody playing this season to be aware of where they would end up in both the 10 tier and 9 tier scenarios.

Every season, there are a number of divisions that experience the angst and discomfort of one or two players having most, if not all, of their matches left to play in the final week or two of the season. To help limit this, in Season 50 we will be implementing Benchmarks for completed matches and automatic removals for those who fail to hit them. In this new system, players will be removed according to the following schedule:

For comparison, the current timeline we use is:

The new Benchmark system picks up where the current system leaves off and provides guidance on pacing for matches. One important note is that we will be looking only at unscheduled matches. If you have your matches scheduled ahead of time, that lets us and your divisionmates know that there shouldn’t be anything to worry about. We’re trying to avoid situations where a player has 4 matches left in the final week of the season and is assuming their four opponents schedules will align to make everything work.

For Season 49, we will be using an alert system to let people know if they would be in danger of being removed under the Benchmark system. This is meant for informational purposes only and puts nobody at risk of being automatically removed from the current season.

Stemming from the Season 48 Town Hall on Drop Rules, we will be implementing a new method for determining Adjustment Matches to account for the uncertainty associated with a player dropping midseason. There will no longer be the complicated formulas and weights attached to determining if an Adjustment Match is needed and only two scenarios to compare. In the new method, we will compare two sets of standings:

There are a few edge cases that could arise from these new rules (and also the current ones), which we have worked through as well. If someone is dropped and two players have played the same number of games against the dropped player in a partial match, we will only consider the standings from Scenario 1 when determining adjustment matches. If more than two players have promotion or non-demotion claims, Moderator discretion will be used to determine the Adjustment Match participants. Finally, if there is a tie in either scenario, meaning the tied players went 3-3 in their match during the season, there will be an Adjustment Match between the players.

At the time of our meeting, there was still the possibility that Allies would be released mid-season. With the printing delay, we will not have to worry about this for Season 49. In the future, both for Allies and possible future expansions, the default card pool for kingdom generation will be all cards, including those from any expansions that were released after the end of the previous league season. However, if one player would like to opt out of playing with cards that were released after the end of the previous season, kingdoms will be generated excluding those cards. In simpler terms, if one player doesn’t want to play with the new cards, they will not be used in the match.