The Season 40 Championship featured the top 2 A division players Mic Qsenoch and nasmith99. Mic Qsenoch had just finished a dominant regular season, going 21-9 against five of the strongest players in the League. nasmith99 also had a winning season, going 16-14 and barely sneaking into the Championship match based on a tiebreaker over xyrix, who finished with the same record. As such, nasmith could only afford to tie one of the six games, while Mic just needed to win one (or tie two). That said, neither of them let these circumstances drastically affect their mindsets, mostly taking each game one at a time.

The match was commentated in real time by xyrix and tracer:

Game 1 featured Goons and a somewhat weak drawing engine with Worker’s Village, Barracks and Cavalry. As is common in weak draw boards with Goons, it’s very important to trash your starting cards quickly. With a few options available, how to trash became an important question, deciding how to mix together the Rats, Monastery, and Scrap. 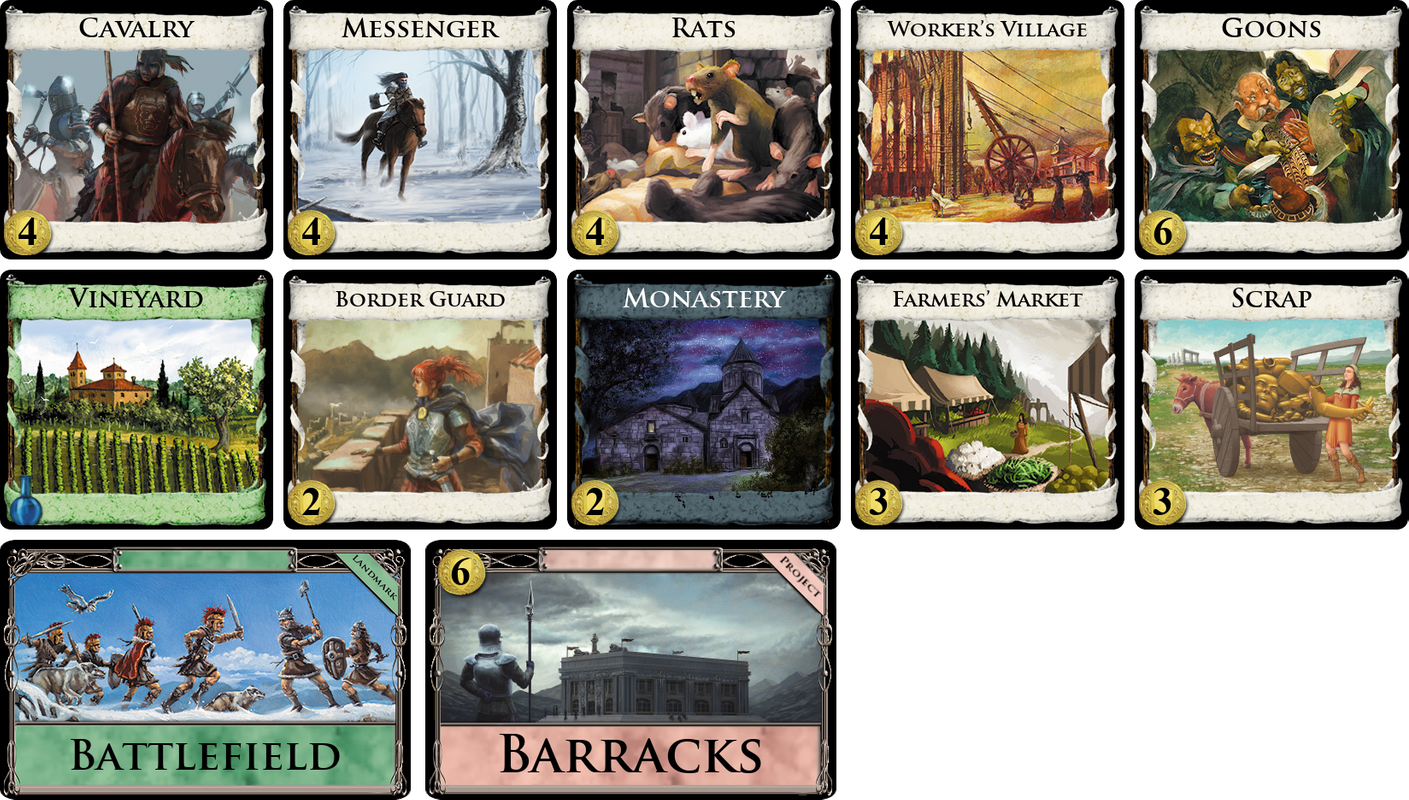 As the underdog, nasmith went first in the first game. On the 4/3, he opened Monastery/Scrap, colliding both with an Estate to trash with Scrap for maximum gains. This early luck compounded, giving him a very nice 3-Copper Monastery trash on Turn 5 as he used a few Rats to clean up the rest of the deck and give him some nice Scrap targets.

Meanwhile, Mic opened Rats/Scrap, but had a tougher time colliding them and fell a bit behind, taking a few more Rats and a second Scrap to clean them up. nasmith was able to grab the first Worker’s Village and Goons, steadily building up his draw engine with Cavalries and the Villages to support them. Mic instead opted for Barracks, which he would later say he regretted because he could have gained two Worker’s Villages that turn instead.

nasmith continued to press his advantage, getting an early point lead from his Goons and finishing his turns with a steadily increasing number of Cavalry plays to accumulate Horses. When piles got low, he added two Rats, which let him finish off the Cavalry and Border Guard piles and then automatically pile the Rats by trashing what remained of his deck.

Game 2 featured a kingdom with an interesting dilemma: Do you build a draw-to-X engine with Cursed Village, Merchant Ship and Tormentor, or a regular Farming Village / Ranger engine with treasure payload? 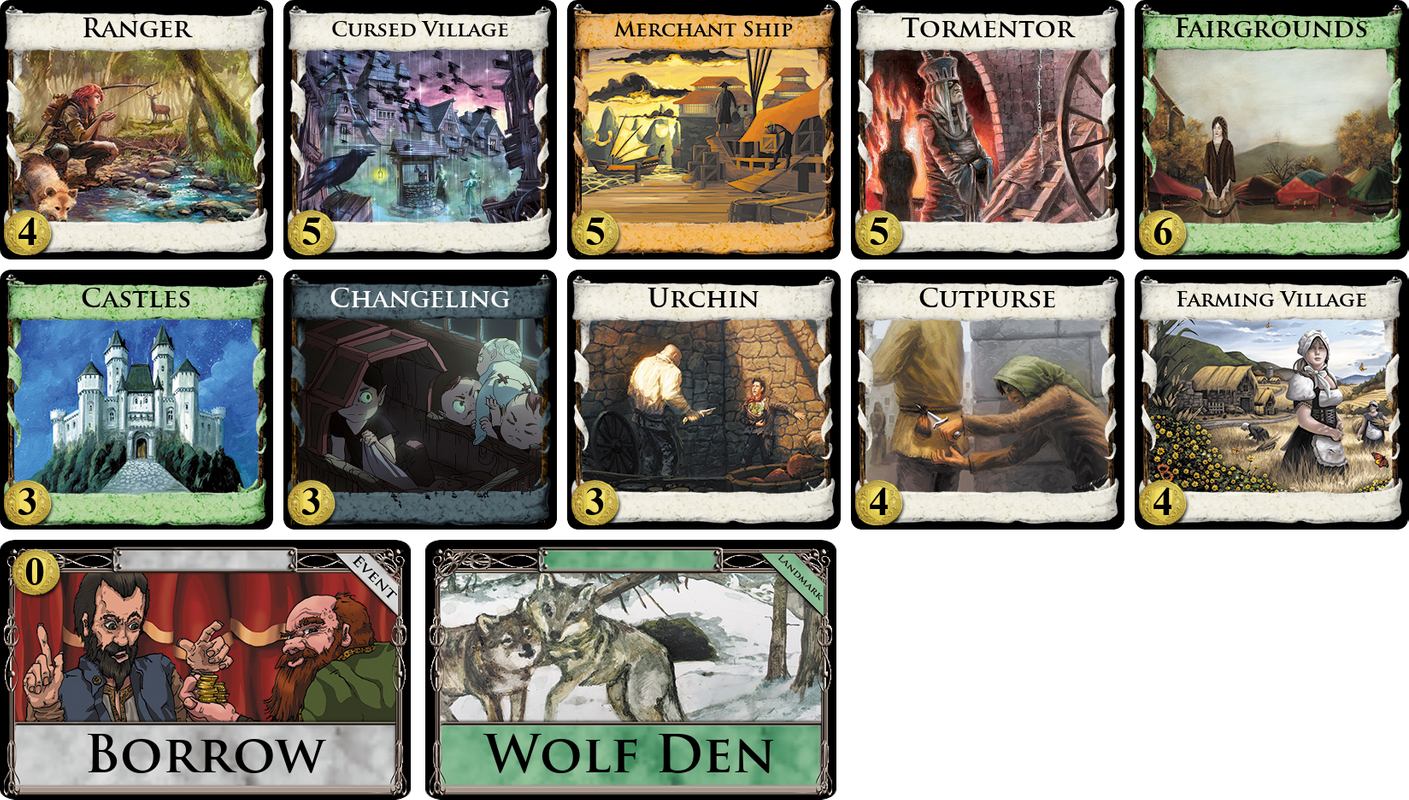 Both players opened Urchin with another attack, Mic getting a Cutpurse and nasmith borrowing to get a Tormentor. They both paired them early on to get Mercenary and trash their starting cards, with nasmith picking up an Imp as well (as the Urchin leaves play). Given the discard attacks, they both picked up two Cursed Villages early on, but went different directions with the exact composition of their payload. nasmith picked up two Golds (one of them on a Deluded turn), while Mic got more Cursed Villages, four Merchant Ships and a couple Tormentors.

As Mic explained, “You can’t play pure CV / draw-to-x stuff, you have to have some buys, early game you are going to want CVs and some of the terminal silvers actions, so I think you always end up playing [a hybrid deck]. The actual deck composition as you build has a lot of things to consider about it that don’t really split cleanly between the two abstractions.”

With Ranger as the only source of +Buy, both players aimed toward the more hybrid deck, incorporating Rangers and Farming Villages alongside economy. They also both trashed thoroughly, enabling them to overdraw quite a bit. nasmith’s extra Golds gave him a bit more payload for the price of less consistency, though Mic would eventually add a couple of Golds of his own, as well as a Silver.

The scoring was quite tricky given how Wolf Den punishes uniques. nasmith started greening first, picking up a couple of provinces and clearing out almost all of his uniques, although the hexes occasionally gave one player or the other an extra Copper or Curse. They both kept uniques in mind given both Wolf Den and Fairgrounds, naturally avoiding the all-uniques Castles pile. Mic took one 4-point Fairgrounds while nasmith went straight for Provinces. Due in part to his earlier greening, nasmith had an extra dud hand, allowing Mic to catch up.

With two Provinces left, a crucial Envy hex kept nasmith to within one coin of the pileout. He took a Province and a 20-3 point lead with one Province left. Mic drew his deck and could buy Province, his second Fairgrounds and unpair his Copper, leaving him one point short. He chose instead to trash his unique Silver and pick up two Fairgrounds, but nasmith was able to hit $8 on his next turn for the Province and the win.

With nasmith’s win going second and a 2-0 lead, excitement started to build among the spectators. Game 3 featured incredibly strong Turn 1 Donate opens by both players: 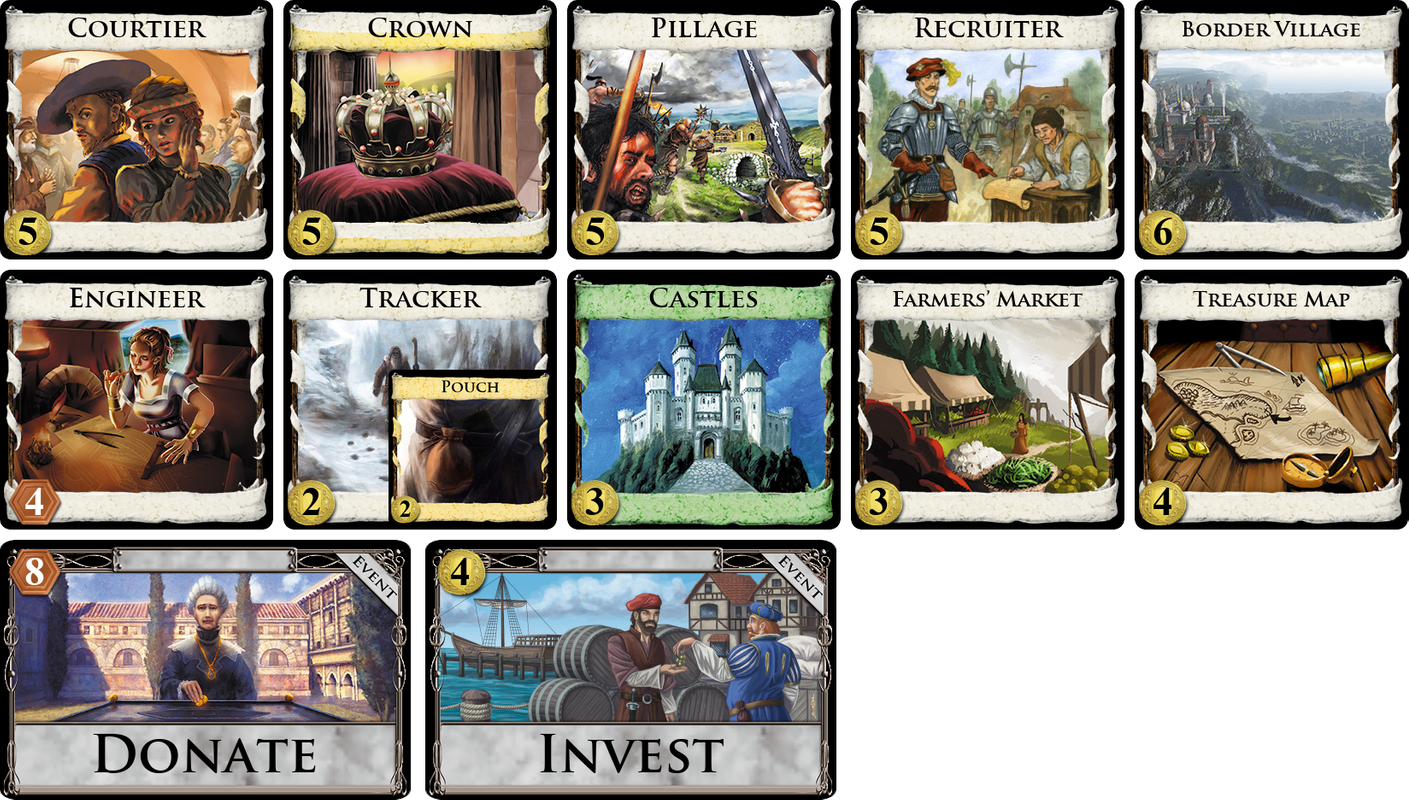 nasmith, going first, had $4 with Pouch in hand, letting him open Engineer / Donate down to just the Engineer and the Pouch. He then trashed Engineer for two Treasure Maps for a quick 4 Golds. Mic, going second, had $5 with Pouch, letting him open Courtier/Donate. After some mental math, Mic decided to keep one Copper and Pouch, allowing him to buy Crown as his first purchase after paying off debt. Both Pouch and Crown having two types allowed Courtier to gain Gold and give $3, helping ramp up buying power quickly.

nasmith similarly picked up a Courtier on his first purchase after cashing in the Treasure Maps and repaying Debt, giving the two players similar deck compositions. From there, it was already time to score, with Mic buying Provinces on Turns 4 through 8. Meanwhile, nasmith pivoted to Castles, buying the first three on Turn 5, buying Haunted Castle and Investing to get the Opulent Castle for just $4 on Turn 6 (which Mic described as “cute”), and trashing the Small Castle to get Sprawling and Grand Castle on Turn 7. This sequence put nasmith in the lead as they continued lowering the Provinces. He took the penultimate Province, going up 8 points as they started to trade Duchies.

Then, a dud turn saw nasmith missing $5 one Duchy into the dance, drawing just one Gold and his Humble Castle off a clean shuffle. Buying Estate left him only 5 points up, with Mic waiting with three Golds, and the win in hand.

Mic commented after the match that he “was just very very surprised that nasmith could only afford an Estate. Mentally, I was completely done with the game assuming a loss. Then I felt the relief from being able to relax the concentration.”

For his part, nasmith explained that although he was a little frustrated, “it didn’t feel like nearly as much of a heartbreaker as it would have if that were game 5 or 6.”

This win secured the championship for Mic, so they played the last three games very quickly.

Game 4 featured a standard drawing engine with Worker’s Village, Smithy, and Scrying Pool draw, and Remake for trashing. Both players tended toward action-based payload in Lighthouses, and frequent Demands to make sure they could draw well. Mic built up to double Province, remaking Scepters into Golds for payload, outpacing nasmith to five provinces and securing another win. 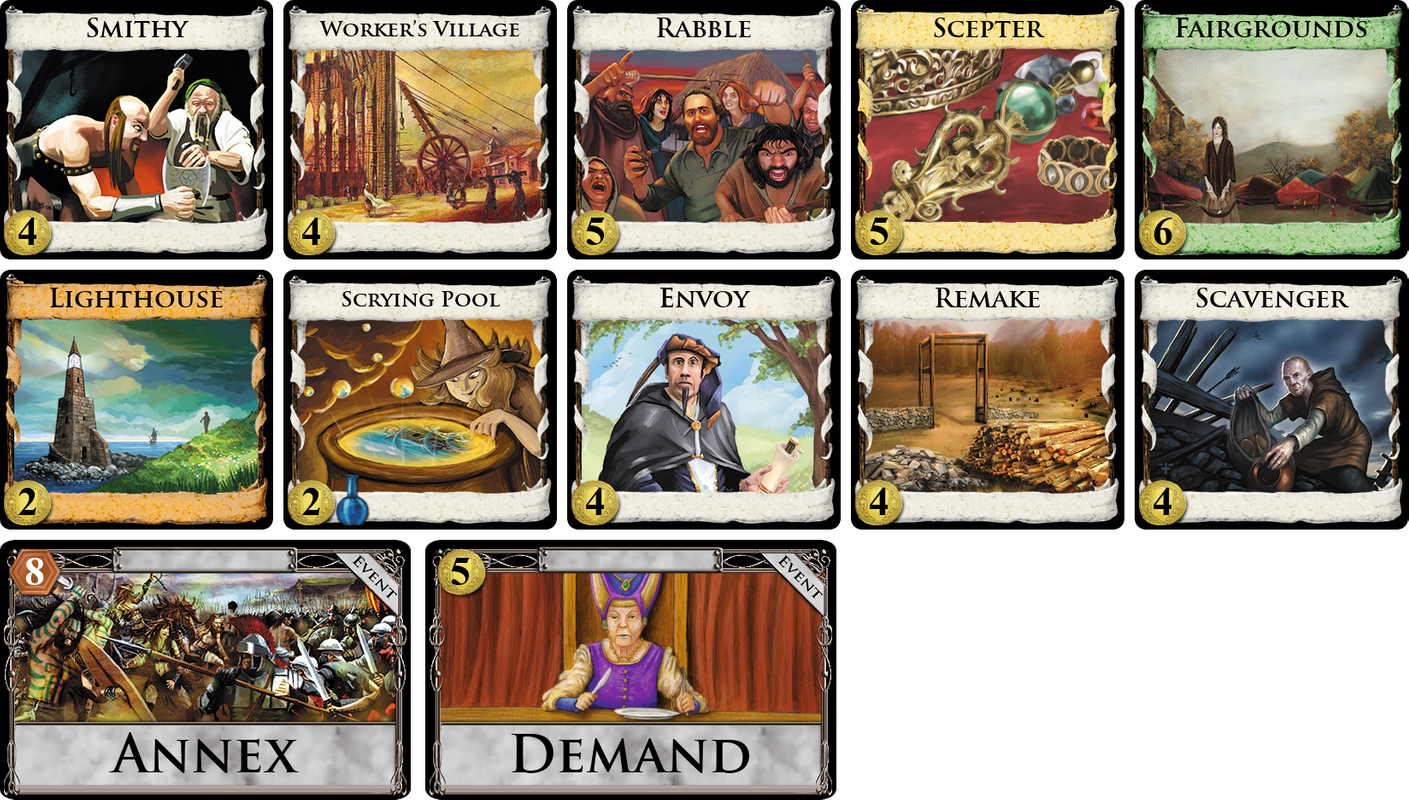 Game 5 was over quickly. Nasmith opened with just a Potion on a 5/2 split, and quickly amassed Universities and Minions. Mic opted for the standard Urchin/Urchin opening, and despite getting a Mercenary at the first opportunity, nasmith’s Minion attacks left Mic unable to play his Mercenary, prompting a quick resignation.

Similarly, Game 6 saw both players open Hunting Party / Peasant, and continue to prioritize Hunting Parties and the Peasant line. nasmith was able to collide Disciple with Hunting Party on Turn 7, eventually getting him a 7-3 Hunting Party split. As he started to add Witches on Turn 10, Mic resigned. 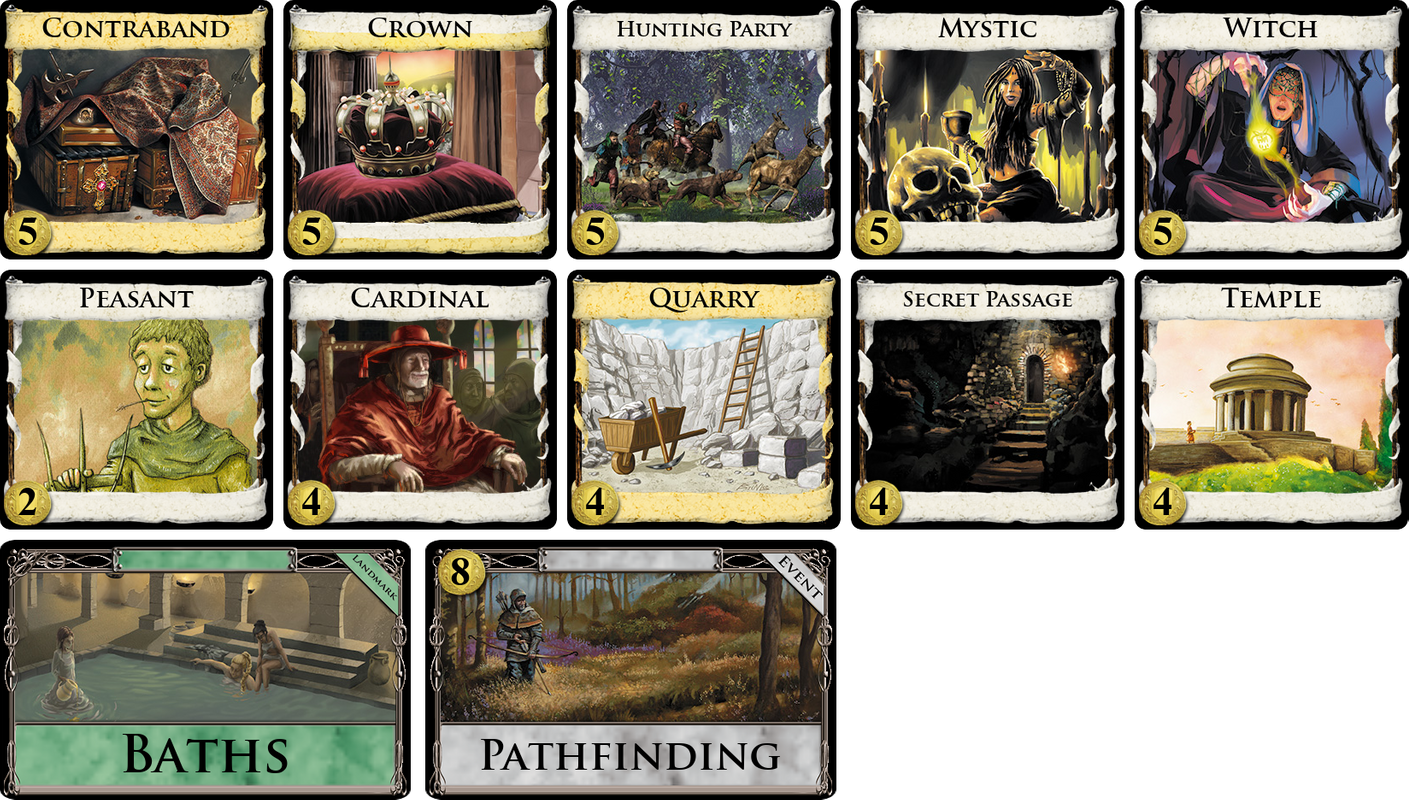 The final result was 4-2 in nasmith99’s favor, a strong performance but not enough to overcome Mic’s big lead from the regular season. This is the 16th championship for Mic Qsenoch as well as his third in a row, his third streak of at least three championships, also having accomplished the feat in Seasons 13-15 and 26-29. Stef and Rabid are the only other players to have accomplished this, having won four seasons in a row in Season 9-12 and 23-25. It is nasmith99’s second runner-up in just his second season in the A tier.

Both players will return to the A division in Season 41, which will also feature 3rd and 4th place finishers xyrix and E.Honda, as well as A tier veteran Sicomatic and newcomer nerdbound, who each won their respective B divisions.